Do you know what happens when a creamy smoothie and power breakfast bowl collide? They make yogurt parfait cups! The offspring two of the best breakfast foods. Okay wow, that’s UBER corny. But it’s truly the best way I can describe this fig yogurt HAVEN!

I had full intentions of just updating this fig newton breakfast smoothie, because yes, the pictures make me cringe. But then I started reading the post and the recipe and I thought to myself. Oh no no no, we need to do better than this. I can’t update this. I need to REDO the whole recipe and make it better, like stat! My OCD tendencies shining bright ya’ll.

So that’s what I did. I revamped the whole recipe using crunchy ancient grains as the topping, California Mission Figs, and much more nutrition packed into that little yogurt parfait cup. Mmmm mmmm, blended yogurt with fig filling and a cinnamon toasted topping!  I think you’re going to like this. “I like it ah lot.” –> Name that movie.

Before I jump into this recipe, let’s talk about FIGS and let’s talk about that makes this Fig Yogurt parfait.. um.. PERFECT. Ha, See what I did there? Parfait means perfect in French. Just in case you didn’t know. Wink Wink. 😉

Okay okay, the PARFAIT part comes from the cinnamon toasted buckwheat groats. Which you will become obsessed with. I promise! More on that later.

But first… FIGS! Gah oh how I love thee! Especially dried California Mission figs! They are delicious. They are packed with so much nutrition!

I’ll go ahead and put on my Corny Cotter hat for this next saying.

Let’s get FIGGY with it!

What I also really like about Figs is that they are a great replacement for banana in recipes (nutrient wise) and they give it recipes more bulk. I love banana but I can’t tell you how many people I know that actually don’t like banana, yet still need that potassium. Figs are a great source of potassium, similar to that of banana. Which is another reason why I added FIGS to this smoothie!

Now that we’ve chatted enough about figs. I should probably tell you what’s in the rest of fig yogurt parfait cups, right?

That top coating and ancient grain is the cinnamon toasted buckwheat! And like I mentioned above, you’ll be hooked at toasting buckwheat after tying this!

Just a little coconut palm sugar, cinnamon, coconut oil, and buckwheat groats is all you need. They toast up in 5 minutes. They also “pop” in your mouth when you eat them. Kinda like cocoa crispies, but .. um.. way healthier and more crunch!

Buckwheat is not a wheat, in fact, it’s not even a grain!

Buckwheat is a seed from a plant that can survives in cold climates. And it has amazing nutrients! It’s high in amino acids, calcium, B Vitamins, and it’s slow to digest. Which means it’s going to help stabilize blood sugar. Now pair that with anti-inflammatory rich cinnamon and you got yourself a winner of a toasted topping for that fig yogurt parfait. Or at least I think so. 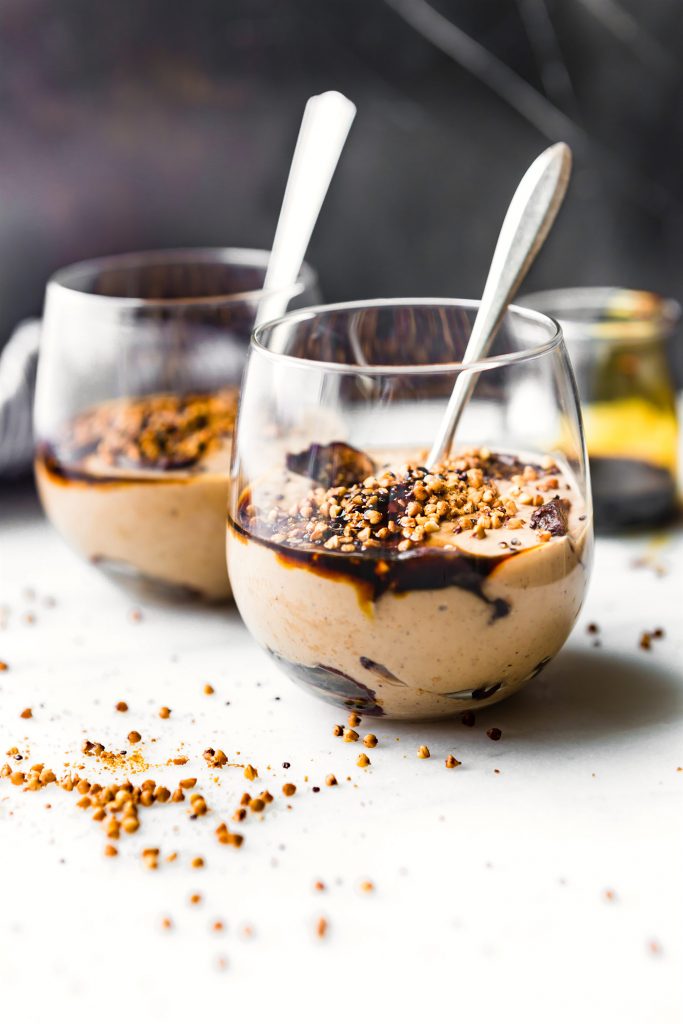 HOW TO MAKE THESE DELICIOUS CREAMY FIG YOGURT BREAKFAST PARFAITS:

Oh and I almost forgot. For a extra dose of iron, drizzle a wee bit of molasses on top of the parfait cups. It’s heavenly!

If you are fig newton fan, then you will LOVE these fig yogurt breakfast parfaits. Taste so similar!!

Favorite breakfast? Any other buckwheat or fig recipes you got? Oh do share!