Chicken pho made with a blended spicy broth! This gluten free almond chicken pho is easy to make in a blender. It’s dairy-free, healthy, and delicious. Blended chili pepper almond sauce is mixed in with the broth to make this soup extra flavorful! A homemade pho recipe that warms the body and soul. 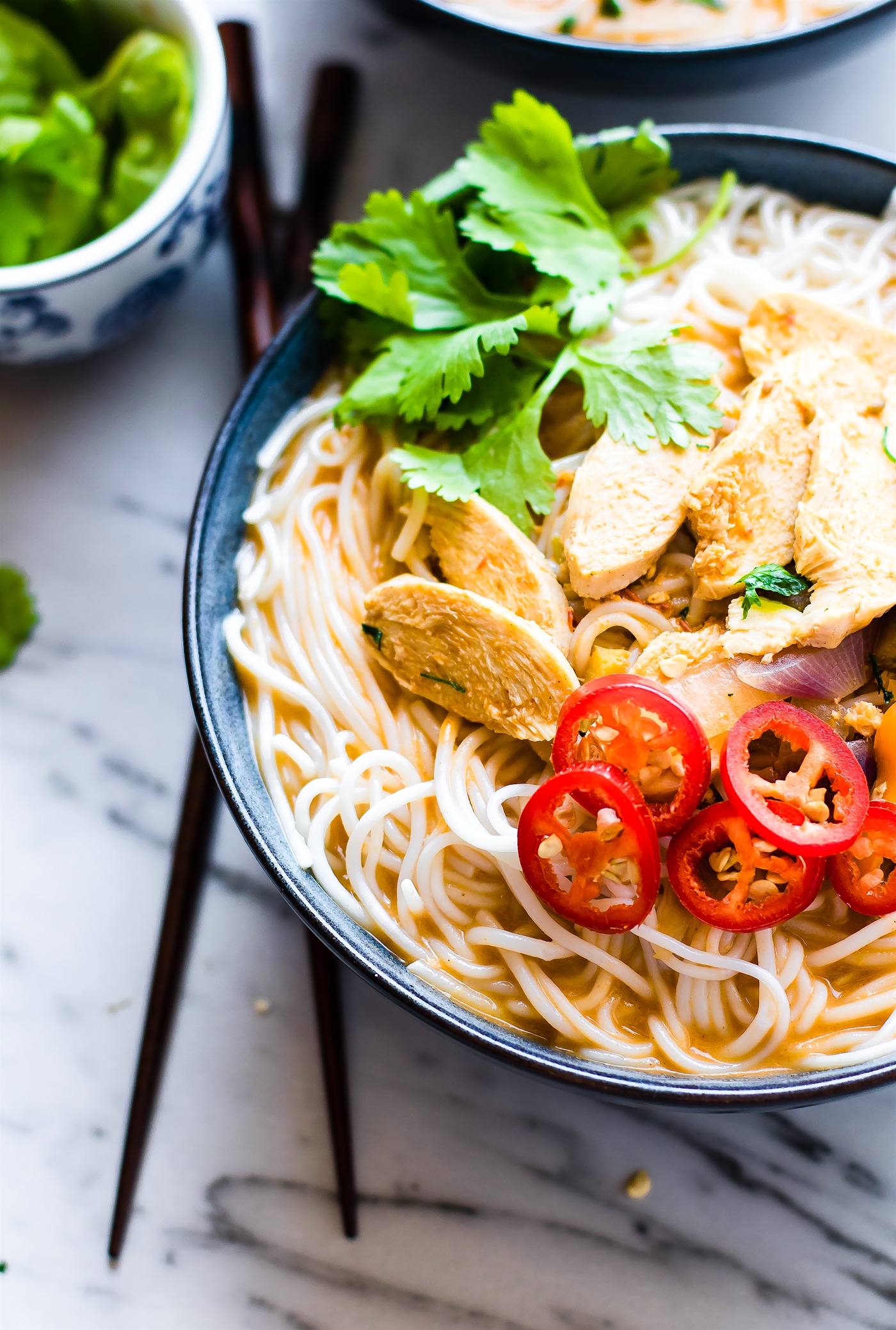 Chicken PHO! Oh, how I love thee. The spicier the better. The more you can slurp on those gluten-free rice noodles, the better. Basically, slurp, sweat, enjoy, repeat. Haha! And now that the weather has turned a whole 5 degrees cooler, I am busting out the soup recipes! All kinds of gluten-free blender soups, vegan soups, paleo chili, and more. I get excited ya’ll!

But gluten free PHO is THE BEST! I last made PHO with shrimp and it did not disappoint. This time around, my husband suggested I make Chicken PHO (we love spicy chicken) using a meatier broth.  His words, not mine. Meatier broth? What does that mean?

Then he went on to reply, it means SPICIER, CREAMY, and all that goodness. Kinda like a Thai Coconut soup (Tom Yum). It’s spicy, creamy, and a little nutty. Two totally different soups, both equally amazing with a high heat sweat factor.

Wait. What is Chicken Pho?

If you have never eaten Pho, you are totally missing out. Pho is Vietnamese soup with a rich, flavorful broth that’s full of fresh herbs and rice noodles. It is eaten plain, or with added protein, like in the case of chicken pho.

Okay, I get it. But you don’t really want to mess with PHO too much. Especially Chicken Pho. There’s a certain way to really make it and it does not involve coconut. That being said, I put my Cotter Creations thinking cap. How can I make a gluten-free Chicken Pho spicy and creamy? Oh ya, BLEND UP an EPIC SAUCE. 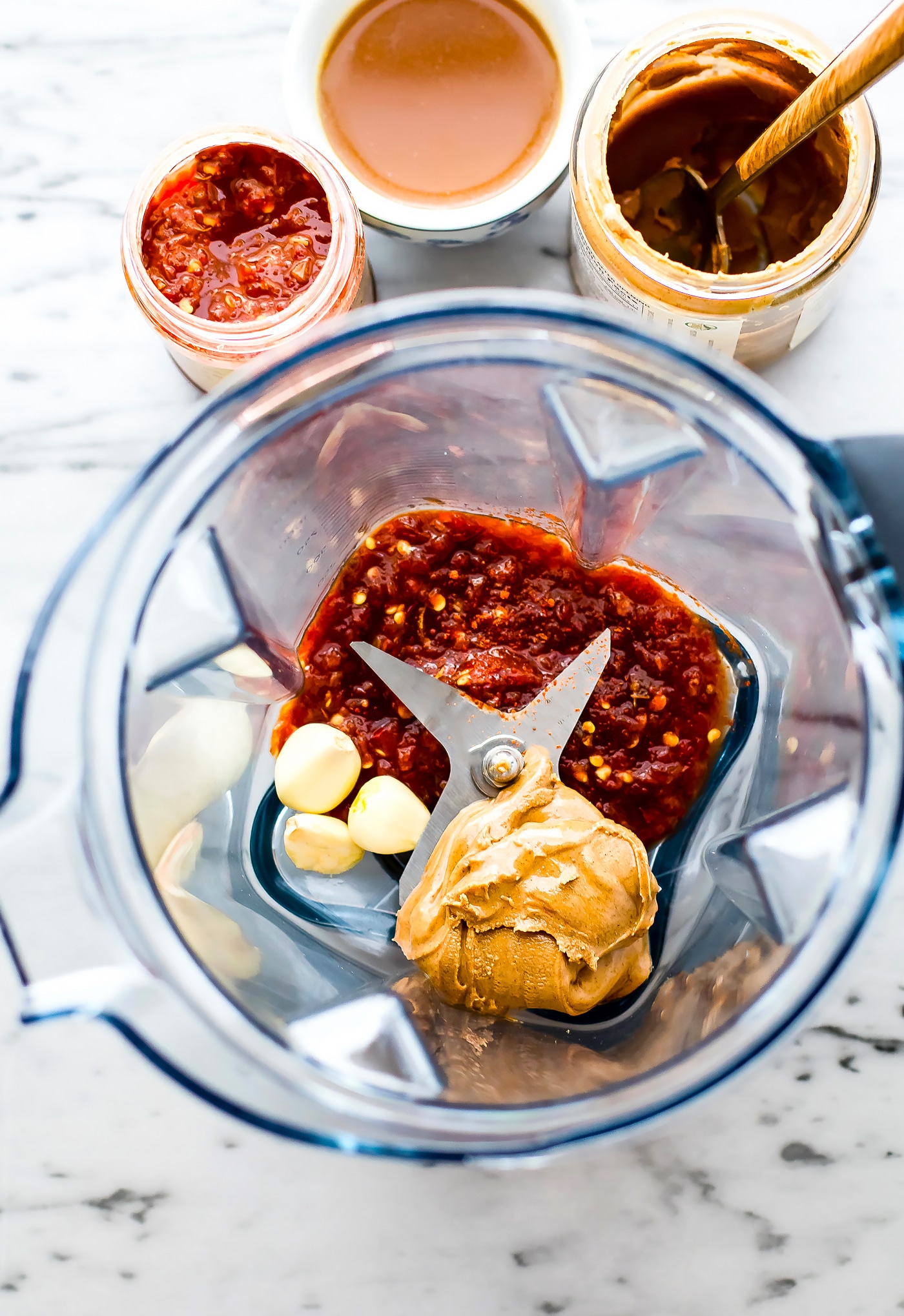 Feel free to add more chili sauce to spice up the chicken pho even more… if you so dare! 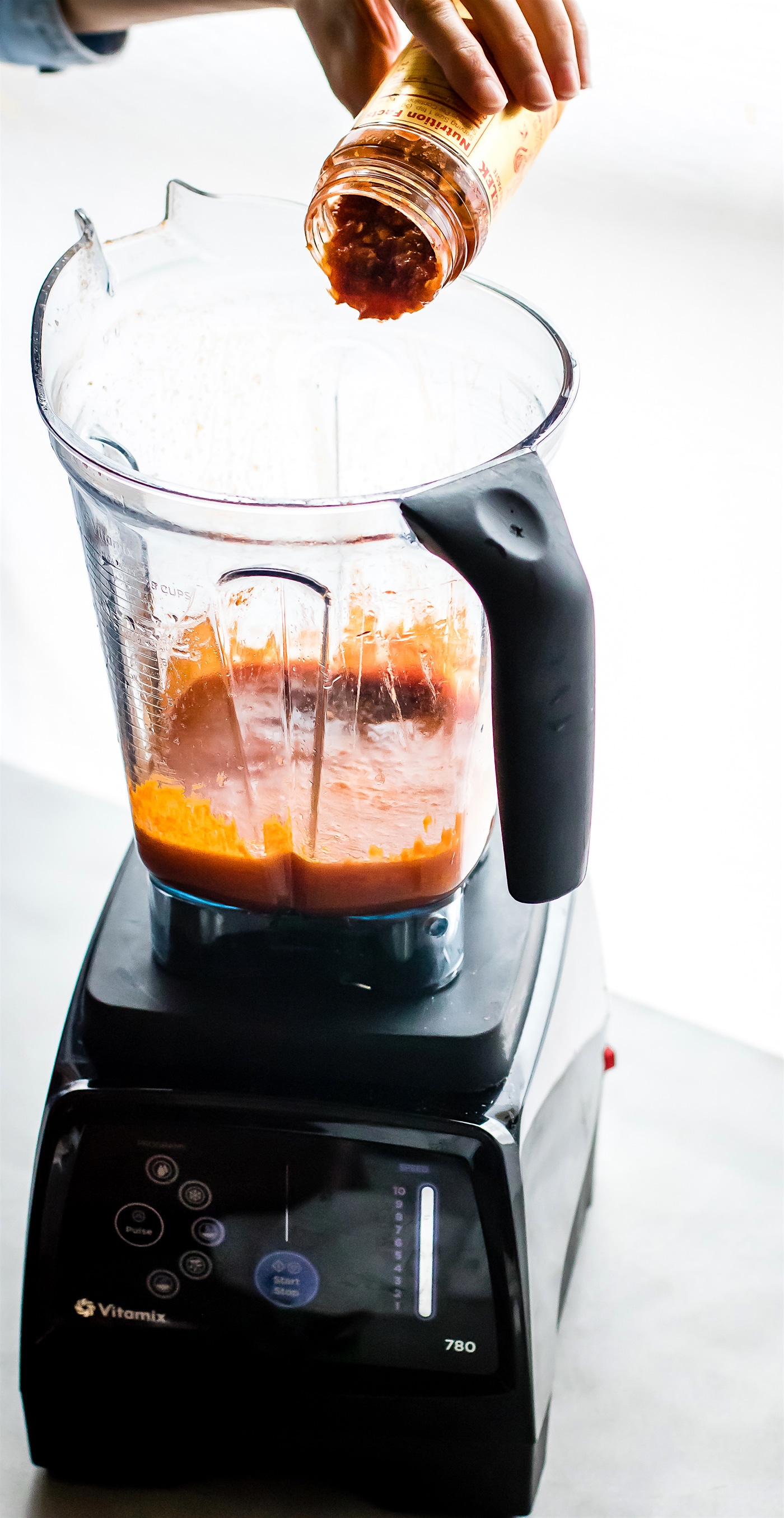 After blending it turns into a fiery orange-red sauce. That’s what you will then stir in with the veggies and broth before adding your noodles. Although, I’m pretty sure this sauce would be EPIC in other soups too, maybe even a crock pot shrimp recipe. Just sayin… 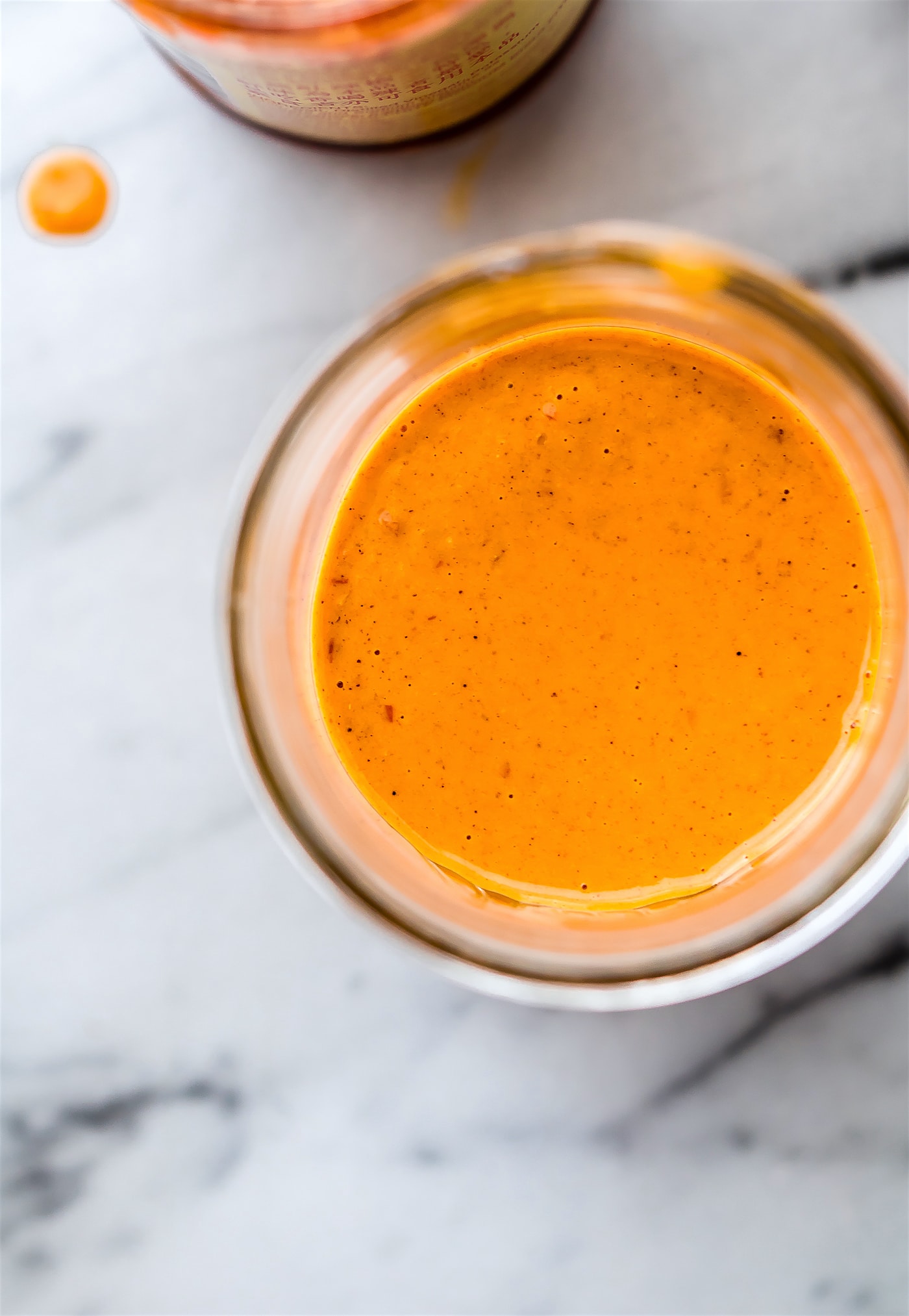 So, come with me and let’s BUST a move with some spicy almond sauce in this super handy Vitamix Professional Series 750 Blender ya’ll! Keep reading cause you’re gonna love this use of the Vitamix.

What I love about the Vitamix is that it can prepare hot soups, pastes, sauces, or broths that are ready to serve in less than 10 minutes. All you have to do is run it for a few minutes to create piping hot soup or sauce. Yep, simply from friction. This is why I didn’t really have to reheat my broth once the spicy almond sauce/paste was added to the Chicken PHO broth. It was already warm and ready to go. Just a simple mix, then serve. 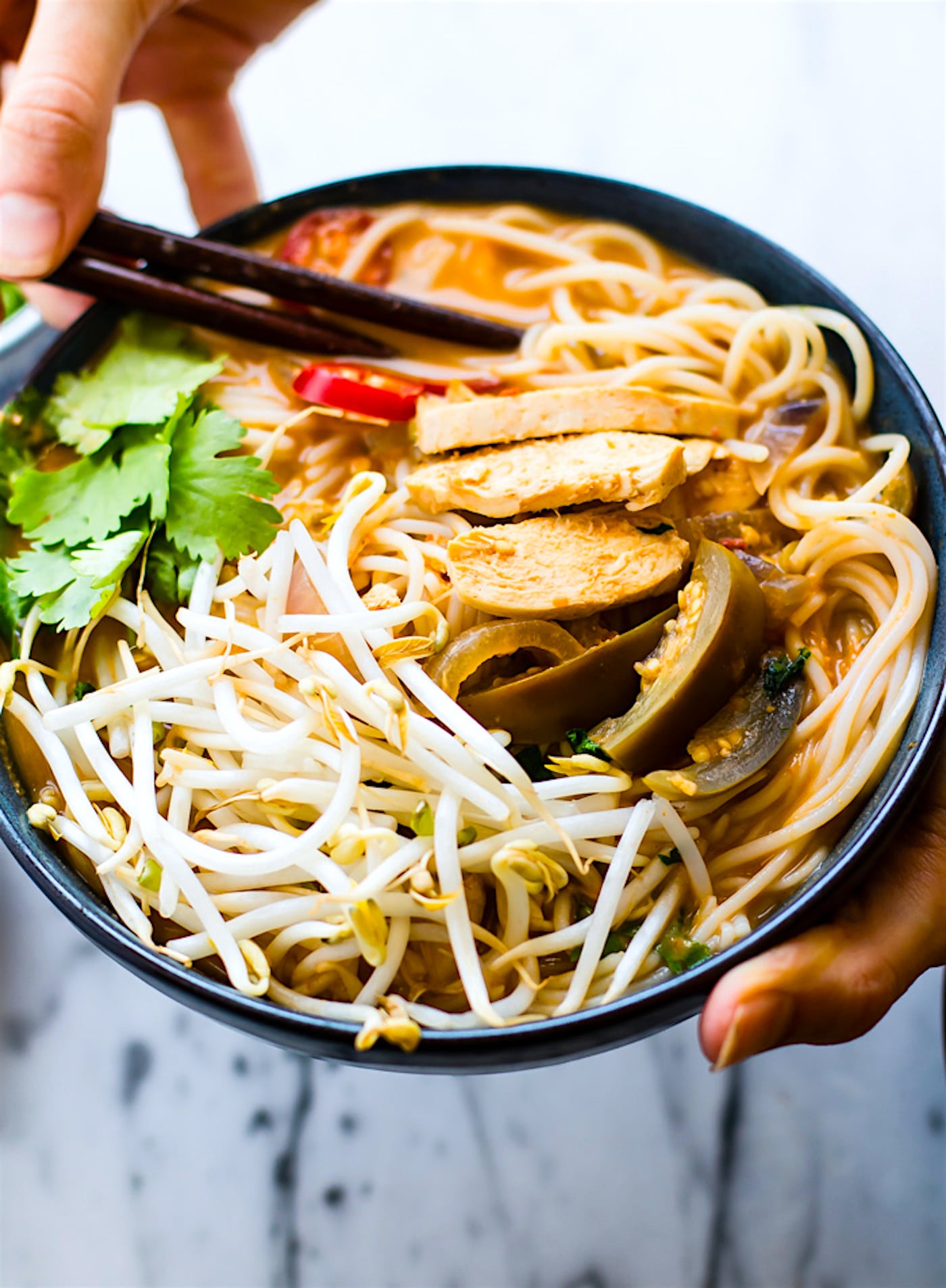 How do you make homemade Pho?

Just gather up your rice noodles, cooked chicken, and pour that hot and spicy almond broth on top. Then garnish with cilantro, veggies (I used mung beans), and extra sliced pepper.

Plus, it’s RIDICULOUSLY EASY! Like PHO sure! Haha, see what I did there? 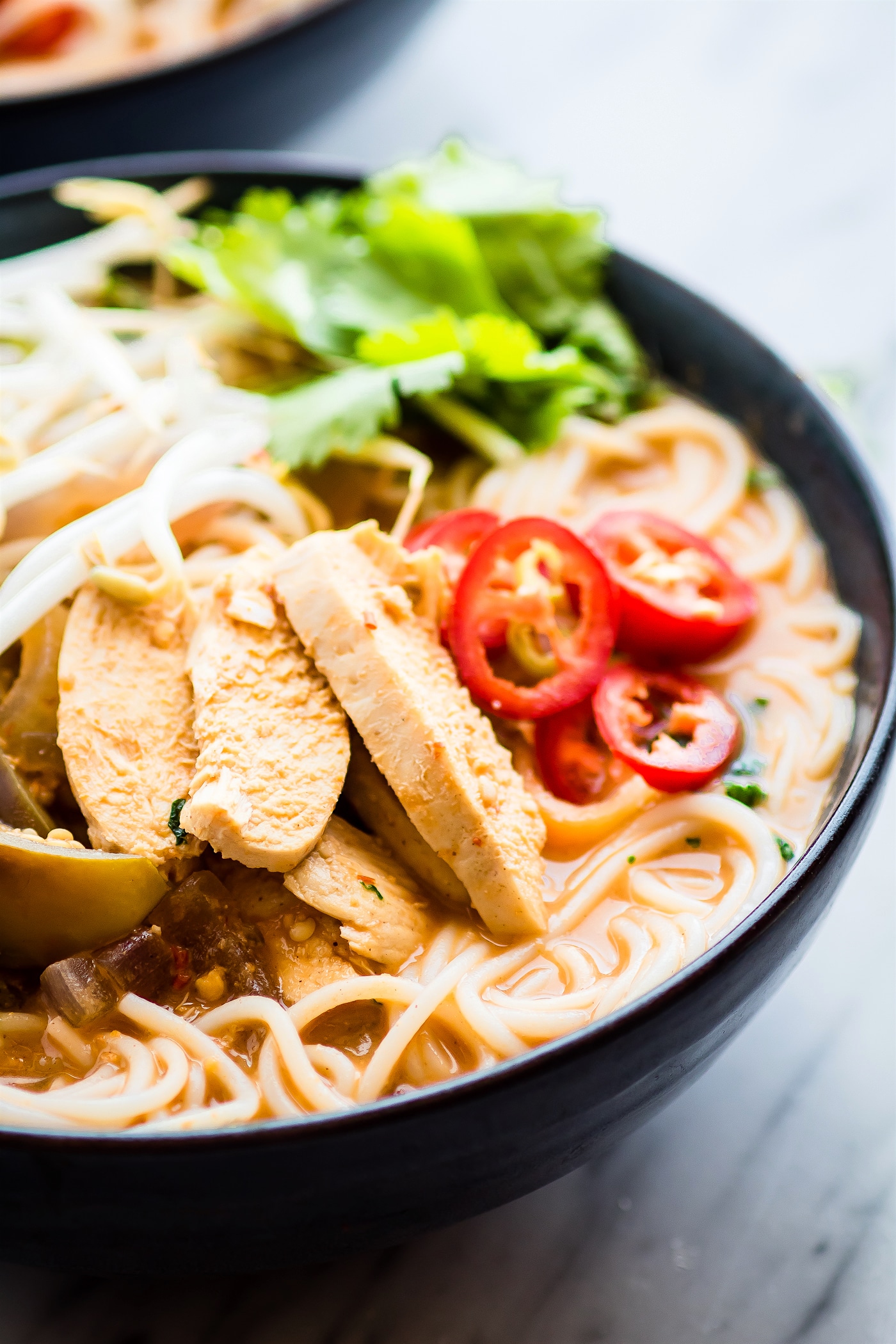 Okay, let’s get to the chicken pho recipe to prove it!

This gluten-free almond chicken pho is easy to make in a blender. It’s dairy-free, healthy, and delicious. Blended chili pepper almond sauce is mixed in with the broth to make this soup extra flavorful! A homemade pho recipe that warms the body and soul.

For the Cooking the Broth and PHO bowl:

Place 6oz chicken breast or two 3oz skinless chicken breast (thawed) in a skillet with 1 tbsp oil, a dash of salt or garlic salt, and pepper. Cook on medium to medium-high, flipping once, for about 10 -15 minutes or until no longer pink in the middle. Slice once cooled.

Blending the almond paste beforehand then mixing in it gives this Chicken PHO a bit of a “flare,” don’t you think? 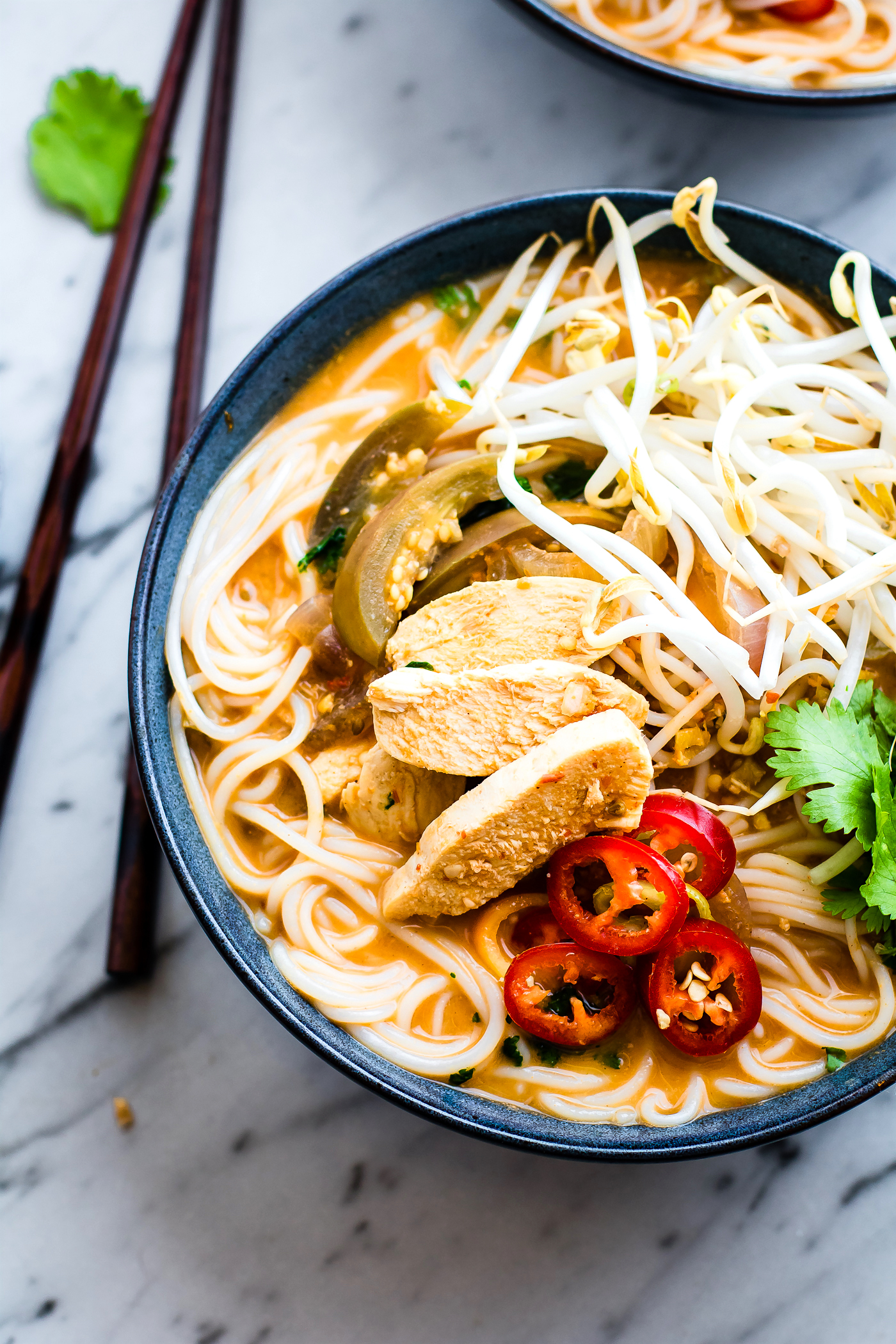 Okay ya’ll, what soup would you blend up first? Are you Chicken PHO fan?

I am PHO SURE! haha.