Vegan macaroons made EASY and QUICK! These Mocha Coconut Vegan Macaroons “cocoroons” are flavored with dark chocolate, espresso, and bourbon vanilla.  A healthy cookie that you will love! Made with a few simple ingredients, these are gluten-free cookies! Plus, a video tutorial, showing just how easy they are to make.

This mocha vegan macaroon recipe is sponsored by my Better Body Foods Friends! I’m thankful they supply us with such healthy, gluten-free, and organic products. 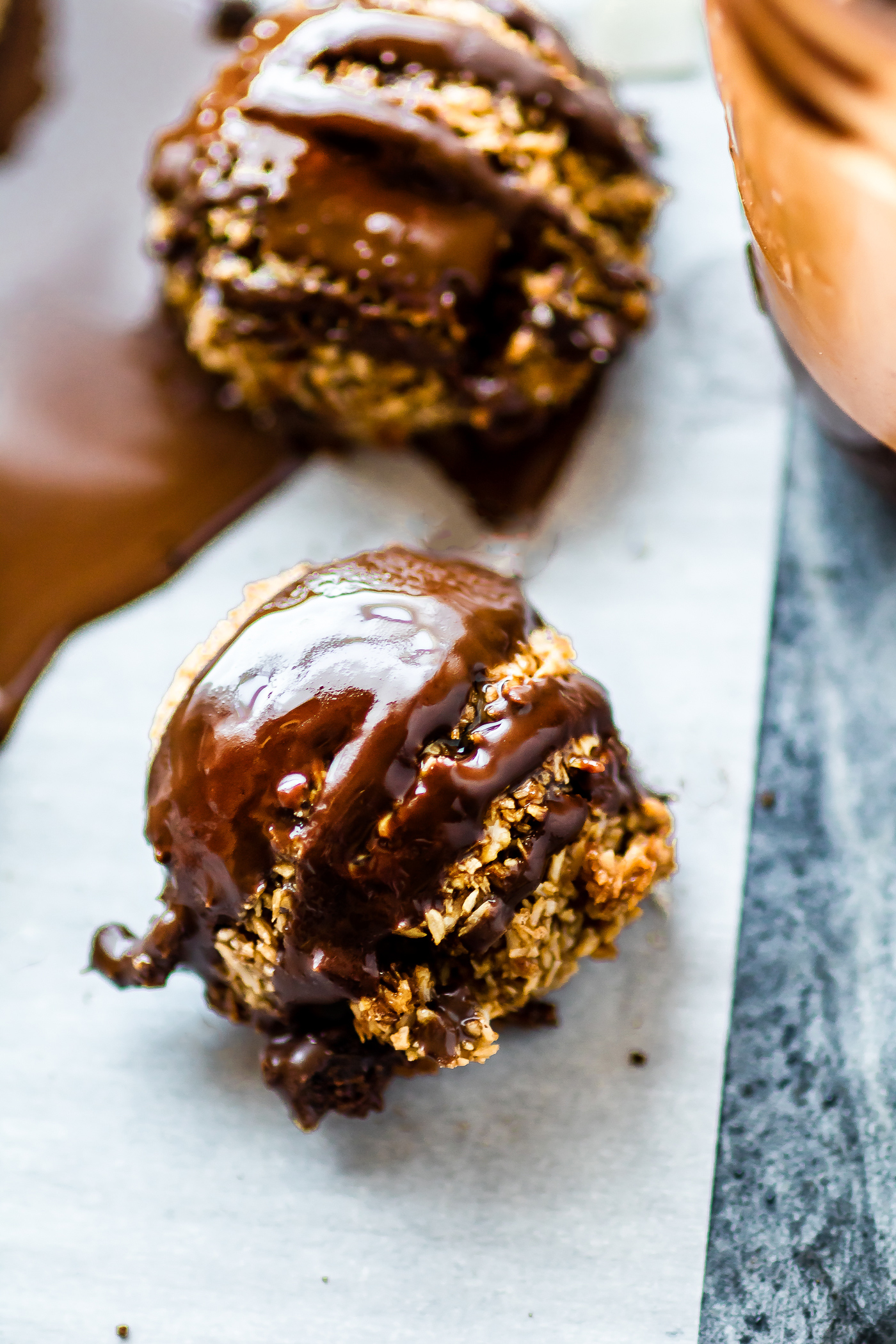 OK friends, I’m a little too excited for this recipe, coconut mocha vegan macaroons. They are my new science project. A tasty, yummy, gluten-free vegan macaroons science project. You see, you might’ve noticed that I posted the aquafaba tutorial last weekend. If you didn’t, I highly recommend you check it out. It’s pretty nifty.

That being said, once I started using Aquafaba, I couldn’t stop. They were so much I wanted to check out. Baking season is upon us, and I couldn’t wait to see if this egg white replacer would really work in certain recipes… hence the vegan macaroons and all that fluffy chickpea jazz.

I have a lot of friends and readers who have certain allergies or are on elimination diets. Heck, I’m the same way. Sometimes I have to back off certain foods for a while and other times I’m A-OK. I think this is true for everybody. It really depends on our own unique needs, am I right?

What’s the difference between vegan macaroons and French macarons?

The coconut macaroon (with two oo‘s) is composed of egg whites, sugar, and dried coconut, and sometimes dipped in chocolate. Although I personally think that “sometimes” should be ALL THE TIME. French macarons are almond flour sandwich cookies. I haven’t mastered those yet. One vegan cookie at a time here, mmm k? Plus I ain’t that fancy yet Y’all!

OK so back to my Aquafaba story. This was my second time experimenting with it and I really loved the outcome.

All you need is about a cup of the aquafaba (whipped) then gently mix it with your coconut flakes, organic coconut palm sugar, extracts, and a little bit of maple syrup.

I used Better Body Foods Coconut sugar with their Madagascar Bourbon vanilla. Oh my heavens that is such a good combo. It’s nutty and delicious. Organic Coconut sugar an unrefined brown sugar with a deep caramel flavor (but vegan caramel of course). It’s produced from the sap of cut flower buds of the coconut palm.

Madagascar Bourbon vanilla (cultivated on the Isle of Bourbon in Madagascar) is also a great vegan cooking extract to use rich desserts.  Madagascar vanilla beans are made with the highest quality and plump moist vanilla beans. Yes, I said plump and beans in the same sentence. But stay with me here…

Now you’re going to combine that with melted dark chocolate or my magic shell and espresso. Like for reals,

Did those exist yet? Because Starbucks should really get on the ball with that if so. But we will stick with mocha for the time being.

Anyway, after making a batch or two, it was time to test out the coconut macaroons on my coconut macaroon loving mother. She is the queen of macaroons. Yep, her favorite. I was hoping she would give the thumbs up, and that she did. I didn’t even tell her that they were vegan macaroons.

Do I get bonus points for trickery? Haha. Maybe.

But I’ll show you just how NOT tricky this vegan macaroons recipe is to make. Mmm k?

Well, I wish I knew the calories for the aquafaba, but either way, these vegan macaroons are light and healthy! Estimated around 80-100 calories each.

All right guys, here’s a short video tutorial to motivate you to make these easy vegan macaroons.

P.S. These vegan macaroons will be an EASY vegan “cookie” for the holidays.

You know when you have a ton of people over with so many different allergies and you want to accommodate them all?  Yep, that’s me… Food allergy people pleaser. Maybe I should start a blog like that.

Signing off, because I’m thinking way too much now.

Ever made macaroons or French macarons?